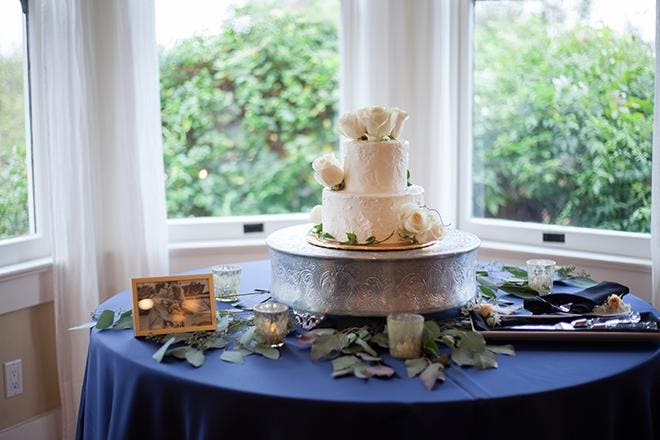 When two longtime medical marijuana users planned their wedding, they knew that cannabis needed to be front and center. Cue the classy California beach wedding versions of joints, edibles, dabs, and flower buds.

Dani Geen’s family was lounging around the living room after a dinner of smoked brisket and baked beans when she broke the news: She planned to include marijuana in every part of her wedding. Her mother, Aura, practically jumped off the shabby-chic sofa. “You can’t do this!” she shouted.

“Mom,” Dani replied calmly. “It’s not going to be what you expect.” 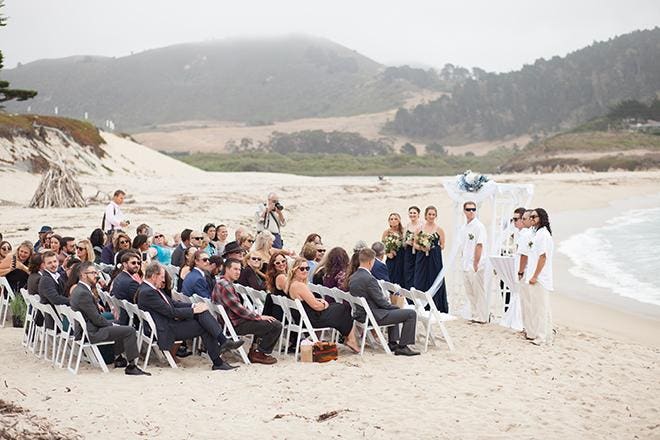 After all, unlike that stereotype of the slothful stoner, Dani is an energetic force committed to the cannabis movement, assisting celebrity activist Steve D’Angelo at Harborside, a medical dispensary in Oakland, California, for almost a decade. She’s also become one of the world’s leading experts in dabbing, aka vaporizing concentrated cannabis.

Thirty-one-year-old Dani and her fiancé, 30-year-old Zak Walton, both struggle with serious medical conditions and have ditched prescription pain killers for cannabis: Dani has long dealt with fibromyalgia, Hashimoto’s thyroiditis, and Cushing syndrome, and Zak has struggled with a shattered herniated disk that causes him extreme nerve pain. At their wedding in August 2017, they both wanted to honor the place pot has held in their personal journeys, and their relationship — after all, they met about 12 years ago and quickly became smoking buddies.

So for the big day this past summer, they integrated marijuana into a classic California beach wedding. 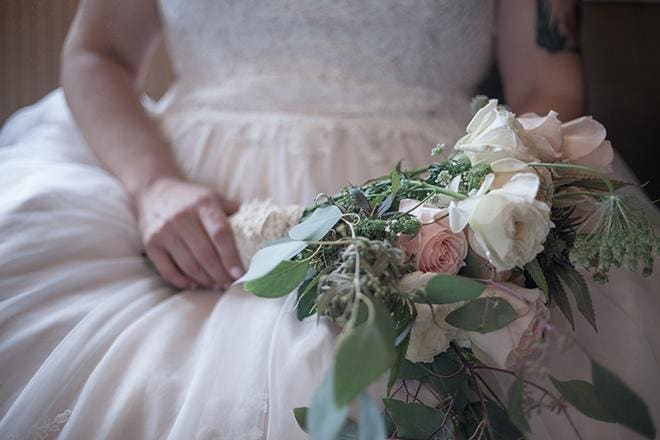 The bride with her bouquet.

Dani and the bridesmaids carried bouquets studded with cannabis buds and flowers; Zak and the groomsmen wore boutonnieres starring cannabis leaves and buds. All of the special foliage came from Harborside’s farms. At the end of the ceremony, rather than reciting personalized vows or smashing a glass, “we sealed it with a dab,” Dani said. Then, to get the party started, everyone lit up a joint on a beach. 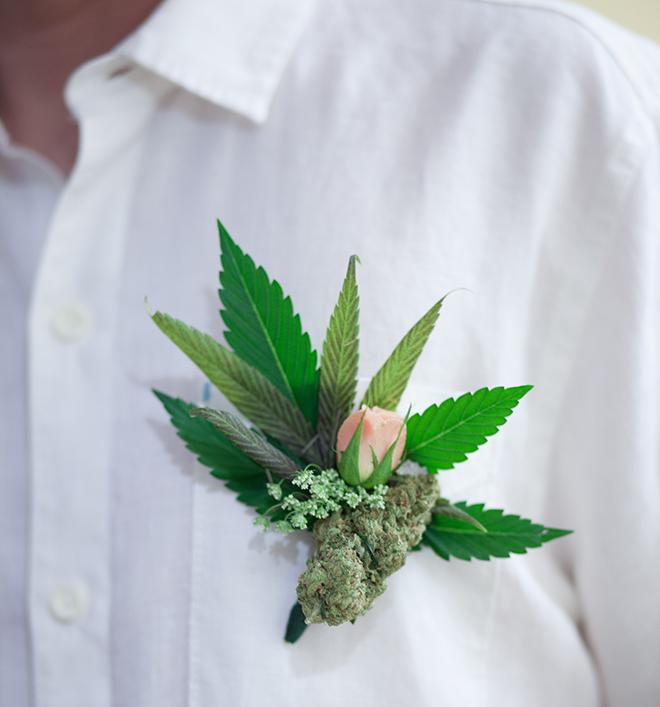 That doesn’t begin to cover the rest of the evening, a reception for 70 guests held at a private event venue in Monterey. The 200-square-foot outdoor dab bar was stocked with 50 grams of hash, the 20-square-foot vaping area snuggled under a tall tree studded with twinkling lights, and the edibles bar featured six kinds of goodies. Of course, the vibe was more Ella Fitzgerald than Phish concert: Guests enjoyed a farm-to-table meal, including steak and salmon grilled while they watched, as well as a gluten-free, organic wedding cake.

Then there were the other sweets: Think medicated macaroons, brownies, and cookies, medicated rose and lavender cotton candy (organic, of course), and a big glass jar of medicated chocolate-espresso bites. 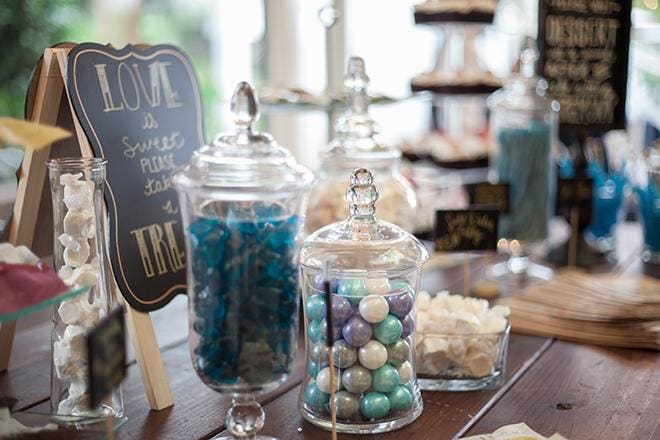 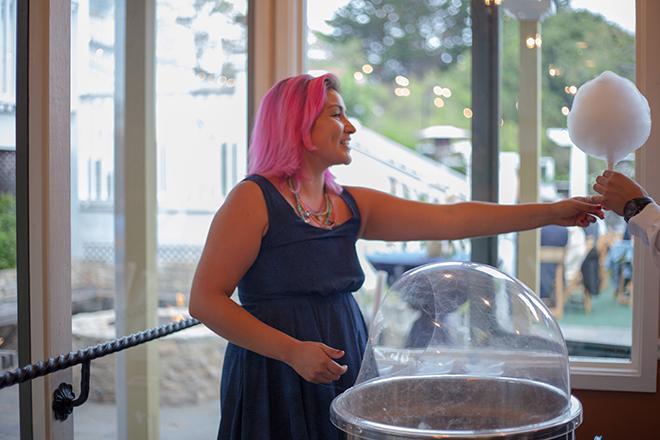 Medicated cotton candy, just for you.

Those who didn’t want to indulge could still treat themselves with non-medicated cupcakes as well as candies housed in chic mason jars. Beer, wine, and champagne also made an appearance, though Dani said she avoided hard alcohol because she “didn’t want to worry about overintoxication.” Everyone received a gift bag with more goodies too, and during the toasts, you could celebrate with “your preferred method of consumption,” said Dani. All of the cannabis was donated, with a retail value of around $8,000.

“The secret is that cannabis is probably a part of most American weddings whether or not the whole family knows it or not,” said D’Angelo. “It’s consumed discreetly and in private. Now it’s coming out of those shadows into the public realm.” 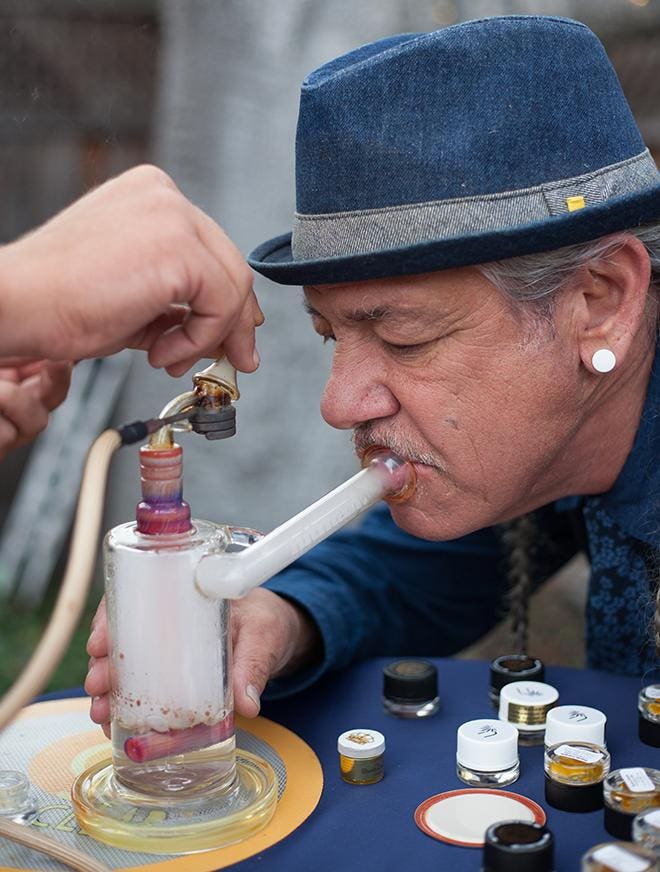 This is made possible by changing state laws regarding cannabis, such as California’s decision to legalize marijuana in November 2016. “We’re going to see cannabis take its place beside alcohol as another, different kind of option.”

At this wedding, though, not everyone partook, especially not the families of the bride and groom. Zak’s family in particular had been worried about coming to the event. “People were asking me if cannabis would be in the food or drink,” his mother, Gail Duboe, said. “I had to tell them it wouldn’t be forced on them.” She said that while she sometimes uses joints as incense and gives her dogs tinctures, she didn’t try anything at the wedding. Instead, she and her family enjoyed themselves by dancing the night away, and afterward said they had a blast. “My fear turned into total acceptance,” she explained. 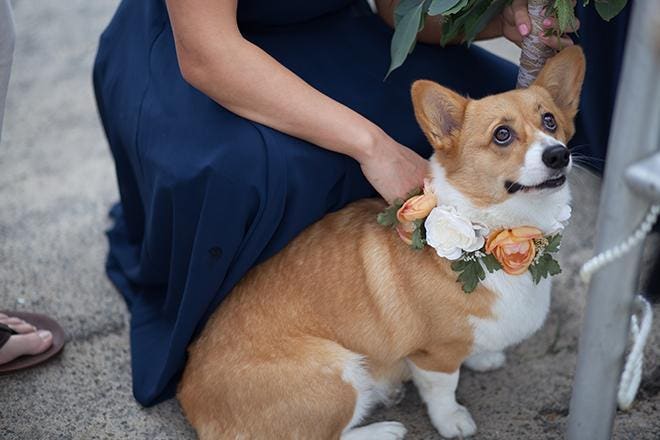 Even the dog had (nonmedicated) fun.

Dani’s mom, Aura, also came around. “It was the classiest wedding I’ve ever been to,” she gushed. “It was a calm, joyous, happy occasion.” She spent the evening cracking up at her 81-year-old mother, who was curious and wanted to try something herself. “She said it smelled good,” said Aura, “like flowers.” Though Dani’s grandmother resisted, another 83-year-old lady hit up the dab bar and told Aura it was the best wedding she’d ever been to. 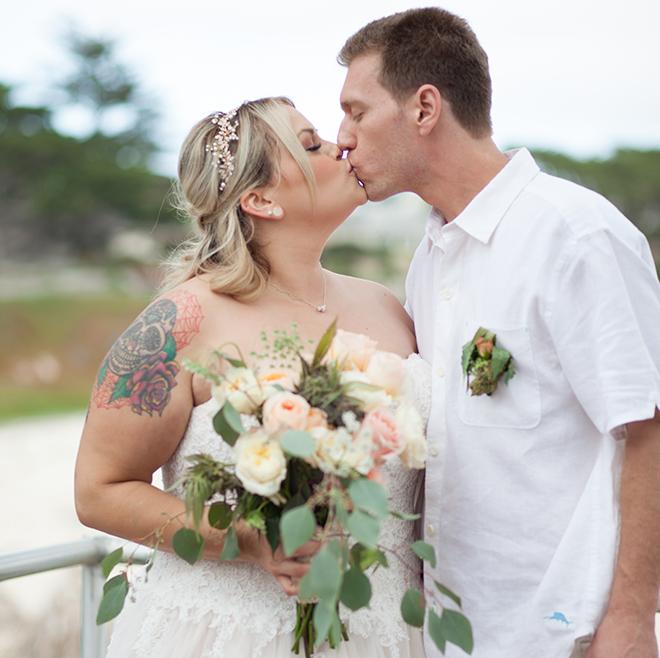 Dani and Zak celebrate their partnership.

“My vision came true,” Dani said afterward. “It was a low drama, mellow day. If I hadn’t had cannabis I would have been more stressed, but because I did, I could be more creative and enjoy the experience. And now people are asking me to help them plan their cannabis weddings.”

Source: This Couple’s Marijuana Wedding Included $8,000 Worth Of Cannabis